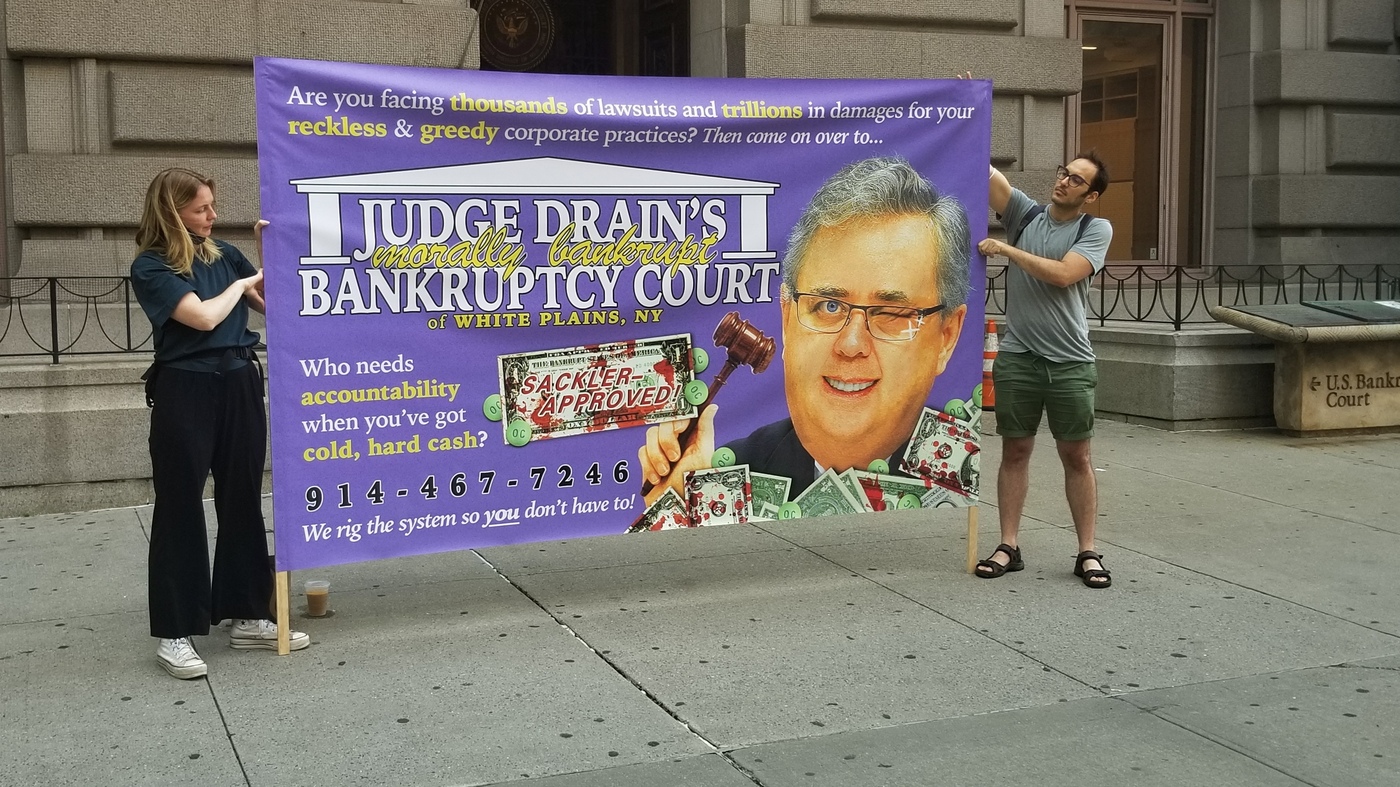 Two demonstrators protest against U.S. Judge Robert Drain, who has granted immunity from future opioid lawsuits to members of the Sackler family.

Two demonstrators protest against U.S. Judge Robert Drain, who has granted immunity from future opioid lawsuits to members of the Sackler family.

Members of the Sackler family who are at the center of the nation’s deadly opioid crisis have won sweeping immunity from opioid lawsuits linked to their privately owned company Purdue Pharma and its OxyContin medication.

Federal Judge Robert Drain approved a bankruptcy settlement on Wednesday that grants the Sacklers “global peace” from any liability for the opioid epidemic.

“This is a bitter result,” Drain said. “I believe that at least some of the Sackler parties have liability for those [opioid OxyContin] claims. … I would have expected a higher settlement.”

The complex bankruptcy plan, confirmed by Drain at a hearing in White Plains, N.Y., was negotiated in a series of intense closed-door mediation sessions over the past two years.

The deal grants “releases” from liability for harm caused by OxyContin and other opioids to the Sacklers, hundreds of their associates, as well as their remaining empire of companies and trusts.

In return, they have agreed to pay roughly $4.3 billion, while also forfeiting ownership of Purdue Pharma.

In his bench ruling, Drain acknowledged the devastating harm caused by Purdue Pharma’s opioid products, which he said contributed to a “massive public health crisis.”

According to Drain, this settlement offers an opportunity to help communities with funding for drug treatment and other opioid abatement programs.

“It is clear to me after a lengthy trial that there is now no other reasonably conceivable means to achieve this result,” he said.

The Sacklers, who admit no wrongdoing and who by their own reckoning earned more than $10 billion from opioid sales, will remain one of the wealthiest families in the world.

Representatives of the Mortimer Sackler branch of the family sent a statement to NPR.

“While we dispute the allegations that have been made about our family, we have embraced this path in order to help combat a serious and complex public health crisis.”

In his ruling, Judge Drain noted that members of the Sackler family had declined to offer an explicit apology for their role leading Purdue Pharma.

“A forced apology is not really an apology,” Drain said. “So we will have to live without one.”

Critics of this bankruptcy settlement, meanwhile, said they would challenge Drain’s confirmation because of the liability releases for the Sacklers.

“This order is insulting to victims of the opioid epidemic who had no voice in these proceedings — and must be appealed,” said Washington state Attorney General Bob Ferguson on Twitter.

The U.S. Trustee Program, a division of the Justice Department that serves as a bankruptcy watchdog, also announced that it would seek a stay of Judge Drain’s ruling pending the resolution of appeals.

The settlement has incensed opioid activists and many legal scholars, who describe the outcome as a miscarriage of justice.

“I’ve never seen any such abuse of justice,” said Nan Goldin, an artist who emerged as a leading opioid activist after becoming addicted to OxyContin.

Goldin spoke to NPR ahead of the ruling, when it became clear Drain would approve liability releases for the Sacklers.

In a series of legal briefs and during a bankruptcy trial over the last two weeks, the Department of Justice urged Drain to reject the settlement. Attorneys general for nine states and the District of Columbia also opposed the plan.

They argued the settlement would unfairly deny individuals and governments the right to sue the Sacklers, who themselves never filed for bankruptcy protection.

“Due process requires that those with litigation claims have reasonable opportunity to be heard,” argued DOJ attorney Paul Schwartzberg during the trial.

Attorneys for Purdue Pharma and the Sacklers argued that without this deal there would be legal chaos as thousands of individuals lawsuits move forward against the company and members of the family.

During the trial, Judge Drain seemed to endorse that legal argument.

In his ruling, Drain did narrow the scope of legal protections available for the Sacklers and their associates.

Consultants and advisers who worked with Purdue Pharma, including a law firm operated by former Alabama Sen. Luther Strange, will no longer be covered by the liability releases.

Attorneys for the family also demanded that family members receive protection from all lawsuits relating to their private company. Drain, however, demanded that most non-opioid claims be excluded from the deal.

He also clarified on Wednesday that protection from civil lawsuits granted to members of the Sackler family does not protect them from any criminal charges.

Critics say the introduction of OxyContin in the late 1990s when members of the Sackler family served on the company’s board helped usher in the opioid crisis.

More than 500,000 people in the United States have died from drug overdoses involving opioids, and millions more suffer from opioid use disorder.

Purdue Pharma has pleaded guilty twice to criminal wrongdoing in its marketing of OxyContin, first in 2007 and again last year. The Sacklers have never been charged and say they did nothing illegal or unethical.

Facing a wave of negative publicity linked to their company, however, the Sacklers have seen their name stripped from buildings and institutions. Many philanthropic and cultural groups around the world have stopped accepting donations from the family.

Supporters of the bankruptcy plan — including most state and local government officials across the U.S. — have voiced unhappiness with liability releases granted to the Sacklers.

But they say the deal is expected to distribute more than $5 billion over the next decade to public trusts created to fund drug treatment and health care programs.

“Instead of years of value-destructive litigation, including between and among creditors, this plan ensures that billions of dollars will be devoted to helping people and communities who have been hurt by the opioid crisis,” said Steve Miller, who chairs Purdue Pharma’s board of directors, in a statement sent to NPR.

Even some early critics of the bankruptcy plan, including New York Attorney General Letitia James, said the money contributed by the Sacklers will do real good.

“No deal is perfect, and no amount of money will ever make up for the hundreds of thousands who lost their lives, the millions who became addicted, or the countless families torn apart by this crisis, but these funds will be used to prevent future death and destruction as a result of the opioid epidemic,” James said in a statement.

The new company that emerges from the ashes of Purdue Pharma will be allowed to continue making and selling opioid products, including OxyContin.

Purdue Pharma itself will re-emerge from bankruptcy as a new company operated as a form of public trust corporation.

An appeal by the DOJ could be the final hurdle

NPR reported on Tuesday that Purdue Pharma and its attorneys launched a behind-the-scenes pressure campaign aimed at convincing the DOJ not to challenge the plan in court.

NPR acquired an early draft of a letter distributed by the drug company to groups supportive of the bankruptcy deal.

The letter is framed as a direct appeal to DOJ officials and purports to be written by those injured by the company and members of the Sackler family.

“We collectively speak for the overwhelming majority of the state and local governments, organizations, and individuals harmed by Purdue and the Sacklers,” the letter states.

There is no mention in the document of the company’s role launching the effort or crafting the message.

“This letter was highly inappropriate. It was wrong,” Hampton told NPR. “It was written, proposed and pushed at the eleventh hour at the beckoning of Purdue Pharma.”

A DOJ spokesperson declined to comment on the drug company’s efforts to influence its decision-making and would not disclose the timeline for deciding whether it will file an appeal.